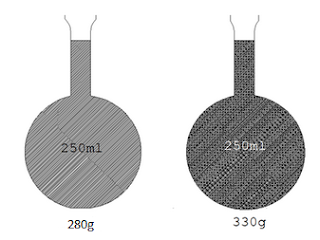 Therefore the density of a substance is the mass per unit volume of a given substance.
The SI unit of density is kilogram per meter cubic (kg/m3) also gram per centimeter cubic (g/cm3). The symbol for density is rho (ρ) ρ=mass/volume.
Example 1.
A block of ice with volume 5.5m3 has a mass of 5060kg find the density of ice.
Solution
Volume of block=5.5m3
Mass of block=5060kg
Density=mass /volume
=5060/5.5m3.

Example 2.
A silver cylindrical rod has a length of 0.5m and radius of 0.4m,find the density of the rod if its mass is 2640kg.
Solution
Mass of cylinder=2640kg
Volume of cylinder=πr²h

Example3.
A stone has a mass of 112.5g.when the stone totally immersed in water contained in measuring cylinder displaced water from 50cm3 to 95cm3.find the density of the stone.
Solution
Mass of the stone=112.5g
Volume of stone=95cm3-50cm3=45cm3

DENSITY BOTTLE
The density bottle (pycnometer) consists of ground glass stopper with a fine hole through it.

The function of the fine hole in a stopper is that, when the bottle is filled and the stopper is inserted, the excess liquid rises through the hole and runs down outside the bottle, by this way the bottle will always contain the same volume of whatever the liquid is filled in provided the temperature remains constant.

Volume of liquid in the bottle=V
mass of bottle and the liquid=m2g
mass of liquid only=(m2-m1)g
density= mass /volume
density=.(m2-m1)g/V
The volume of the bottle is known, usually 25ml, 30ml or 50ml
Example 1
A 30ml density bottle was filled with kerosene and found to weigh 86g.if the mass empty dry bottle was 62g, find the density of kerosene.

Determination of densities of granules and sand 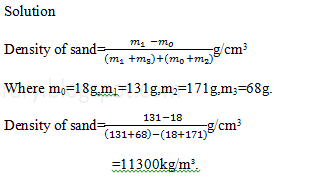 Example 1
A globe of steel has a mass of 12g and a volume of 15.2cm³,find its relative density. 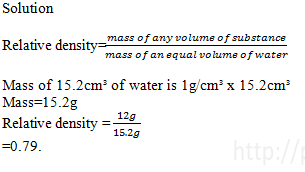 To measure relative density of liquid by density bottle

ü  Fill the bottle with water and find mass m2

Since comparison of density is done with water (referenced substance) the other name of the ratio is specific gravity of a given substance. Because the density of water is 1g/cm³.Relative density has no units it is simply a number or ratio.
Example
The mass of density bottle is 19g when dry and empty, 45g when filled with water and 40g when full of liquid x. calculate the density of the liquid x. 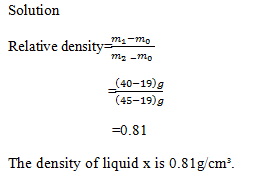 Determinations of relative density by eureka can method
ü  Find the mass m₀ g of solid
ü  Fill the eureka can  and let water overflow until last drop
ü  Place under the spout of overflow can a clean dry beaker of mass m₁ g.
ü  Lower the solid slowly with thin thread until it is totally immersed
ü  Obtain the mass of water that overflow from the eureka can and the beaker itself m₂ g. 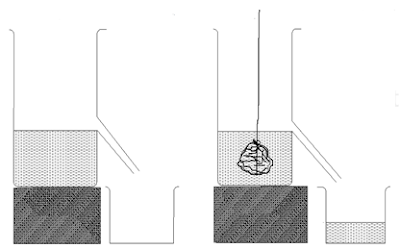 EXAMPLE
A certain piece of metal has a mass of 282.5 g,if when the block was totally immersed in overflow can displaced water in a beaker of mass 20 g.if the mass of water and the beaker was 45 g,find the relative density of the metal. 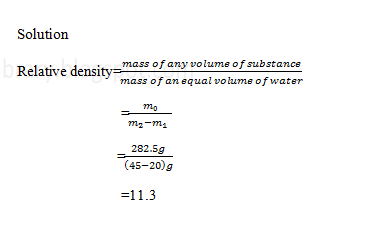